As was expected, the mega-demonstration in Barcelona on September 11th has brought with it an avalanche of anti-independence analysis designed to instill fear in the Catalan people. What was not expected, however, was that the intellectual level of said analysis would be so low: not only are the anti-independence articles full of errors, but in addition, when carefully analyzed, they end up supporting independence. Let's look at the three most repeated arguments.

"Independence would be bad for Catalonia because they would have to take on a proportional part of the Spanish debt and that would be disastrous." The error in this argument is that it doesn't explain what will happen to Catalonia if it remains within Spain. Who will pay off the Spanish debt in that case, extraterrestrials? No! The Spanish! And who will pay the proportional part that corresponds to the Catalans? The answer to that now, is of course, yes, the Catalans! That is what has always occurred and that is what will continue to happen as long as Catalonia forms part of Spain. Therefore, if the Catalans have to pay a proportional part of the debt whether they stay or whether they go, the debt argument doesn't make any sense at all.

In fact, if we were going to take this argument seriously, and if independence were to be decided solely on the criteria of the amount of debt to be paid by the Catalans, the rational decision would be to leave: since there is no law that regulates independence, it's not 100% sure that Catalonia would have to take on a part of a debt that was incurred by the Government of Spain. Therefore, by declaring independence, it might save itself from that load. Conversely, what is 100% sure is that if they stay, they will have to pay their part of the debt.

One variant on this theme is "if Catalonia becomes independent, its risk premium will go sky high, and it won't be able to get loans in the international markets and the Generalitat's rating will have junk bond status. The fallacy consists in not realizing that this already reflects the current situation in Catalonia. If by virtue of being an autonomous region of the Spain of ruinous solidarity, Catalonia cannot get any loans and its bonds have junk status, the threat of sinking to junk bond levels is rather ridiculous.

In fact, if we took this theory seriously and independence were only to be decided by the criteria of having access to the international markets, the rational decision would be to leave: There is the possibility that the markets would see that in the case of independence, the 16 billion euros on average that annually go to Spain to finance other regions if Catalonia stays in Spain but that wouldn't go if it were independent, are sufficient so that the Generalitat can pay its debts and its bonds would no longer be junk. We don't know what will happen if there is independence. What we do know is what's happening right now with a dependent Catalonia: junk bonds.

Another repeated threat is that "if Catalonia leaves, Catalan retirees who have paid into the system all their lives will lose their pensions because the Spanish government won't pay them." Besides the fact that if it were true that the Government of Spain were capable of depriving older people of their pensions out of vengeance that that would be another reason to leave the country sooner rather than later, the argument contains another important mistake: the Spanish government doesn't have the money for the Catalan retirees' pensions. Everyone knows that the pensions of today's retirees are paid with money that comes from today's workers, and that the money that the retirees paid when they were working disappeared when the pensions of that time were being paid. The money that will go to the Catalan retirees, then, is not held by the Spanish government, but rather by Catalan workers. And since there will be Catalan workers in an independent Catalonia, there will be money paid in, and the pensions will be guaranteed.

In fact, if we took this argument seriously, and independence were only to be decided solely on the criteria of the pensions, the rational decision would be to leave: between 1995 and 2010, Catalans paid an extra 24.774 billion euros into the Spanish Social Security system. If that money had stayed in Catalonia, there would have been an additional 3300 euros per person. From the point of view of the pensions, therefore, Spain is also a bad business for Catalonia. 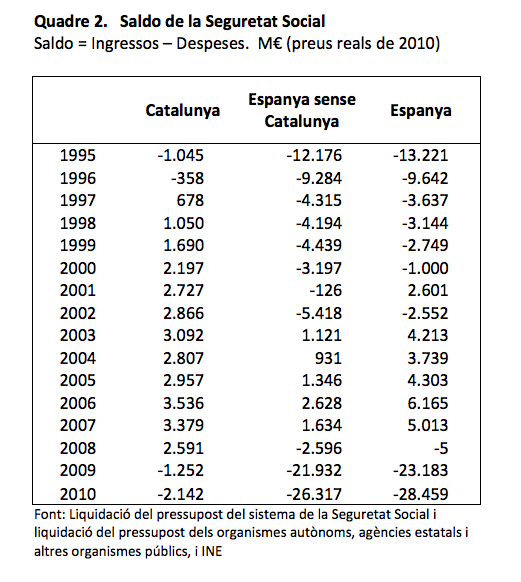 The third most common threat is that of international trade: "Catalonia's most important trading partner is Spain and if we put a barrier between Catalonia and Spain, the trade between the two areas will be reduced by 70%, resulting in a fall of 9% of Catalan GDP." Where did the 70% come from? Answer: from Portugal and the Czech Republic. Since there is a border between Spain and Portugal, say the analysts, when there is a border between Catalonia and Spain, their trade will fall to the level of Portugal's. What they don't take into account is that it's not the same to start from a situation in which there were trade barriers (like there were between Portugal and Spain before joining the EU) as it is to start from a situation that has no such barriers, as would be the case of Catalonia and Spain (see also Pol Antràs en Nada es Gratis). They use the example of the Czech Republic because, when it became indendent from Slovakia, the trade between the two countries fell 70% and that's the same number they apply to Catalonia without taking into account the fact that the Czech Republic and Slovakia were two communist countries controlled remotely by a government who told each one what it had to produce and where it could sell. Logically, when communism fell, this entire commercial farce disappeared, but none of that has to happen in Catalonia and thus saying that trade will fall 70% is pretty stupid.

In fact, if we took that theory seriously and independence were only to be decided by following this trade criteria, the rational decision would be to leave: because the analysts only talk about how trade fell between the Czech Republic and Slovakia but they don't mention the trade with Germany, Europe and the rest of the world that rose so much that the entire trade exports figure (adding Slovakia's as well as the rest of the world) has gone from 49% of the Czech GDP in 1993 (the year it became independent) to 75% currently. 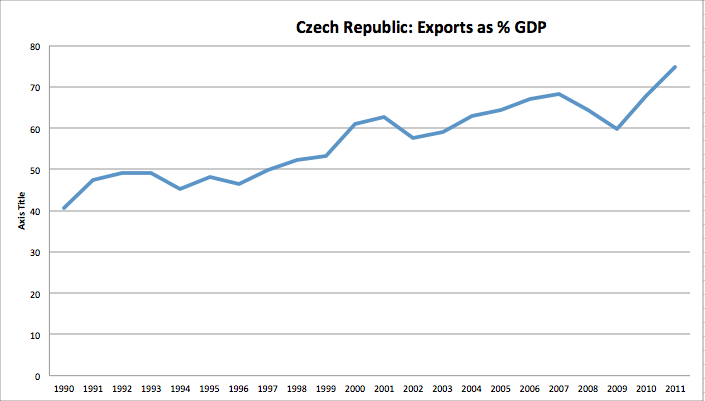 Far from falling the 9% predicted by Spanish doomsayers, the Czech Republic's GDP went from 13 billion dollars in 1993 to $23.4 billion today. Thus, the Czech example also bolsters the independent cause. 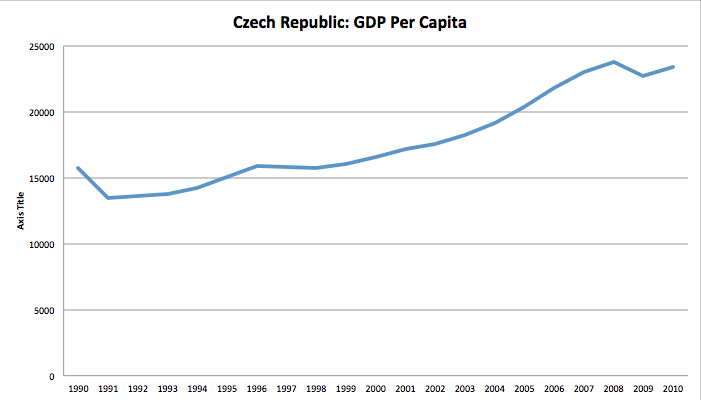 In summary: up til now, all of the arguments that have been used to "demonstrate" that the economic situation of an independent Catalonia would be catastrophic are so fallacious that once they are carefully analyzed, each and every one of them ends up saying the same thing: if we took the theories seriously and independence were to be decided solely on that criteria, the most rational response would be to leave. Indeed, the fear mongering strategies remind us more and more of Wile E. Coyote, whose unhealthy fixation on hunting the Roadrunner makes him commit monumental blunders that end up, in each case, backfiring on him disastrously.

Xavier Sala i Martin is the J. and M. Grossman Professor of Economic Development at Columbia University in the city of New York. He earned his PhD in Economics at Harvard University in 1990.He previously taught at Yale University, Harvard University and UPF in Barcelona. He is a research associate at the National Bureau of Economic Research and Chief Economic Advisor to the Centre for Global Competitiveness at the World Economic Forum in Davos, Switzerland. His research interests include Economic Growth and Development and Macroeconomics.
Website: www.salaimartin.com

Latest from Xavier Sala i Martín

back to top
FaLang translation system by Faboba

The Political Economy of Secession in the European Union

The Political Economy of Secession in the European Union